A History of Our Building

The deed to the parcel of land identified as “Fraction, Lot 77, Old Town” was originally held by John Paul, who laid out and platted Madison in 1810. In 1821, John Paul sold the lot for a whopping $100. It was sold again in 1826 for $400. In 1834, Milton and Elias Stapp took ownership and commenced construction of the building that stands to this day and would remain under the stewardship of the Stapp family for the next 38 years.

Members of the Stapp family presumably lived on the second and third floors in the early years of the building’s life, but the original use of the ground floor storefront is lost in the mists of time. In the late 1830s and early 1840s, there were two periods of expansion of the building from its original footprint to the dimensions of the present brick structure. Either in the original construction or in one of the phases of expansion, the building was graced with an Italianate façade and crown, in keeping with the style that was in vogue from the early 1830s to the 1890s. 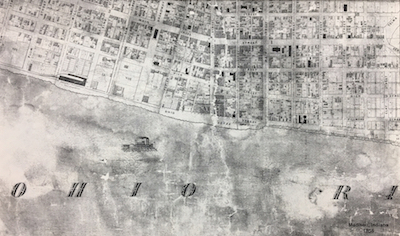 In 1871, Stapp entered the world of retail, and the business was renamed simply William Stapp Shoe Store. By 1875, one C. A. Stanton was employed as a salesman, and by 1879, he had purchased the business, which became C. A. Stanton Boot & Shoe. Stanton advertised as a boot and shoe dealer, and the retail side of the business dominated. By the mid 1880s, the third floor was no longer used as a residence and the second floor was not used in the fabrication of boots or shoes. The second floor became the workspace for W.E. Green, Manufacturer of Rubber Stamps & Stencils, and the third floor housed the Central Union Telephone Company exchange. This arrangement held through the early 1890s. 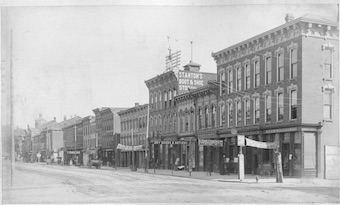 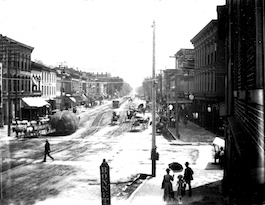 In 1887, to ensure that everyone knew exactly in which direction they were going, Main Street became Jefferson Street, Main Cross became Main Street, and 11 Main Cross became 110 East Main Street. At around that time, two younger Stantons, Charles E. and Robert F., became salesmen for C. A. Stanton Boot & Shoe at 110 East Main Street. In 1903, C. A. Stanton retired, Robert F. took the helm, and the business was re-dubbed Robert Stanton, Shoe Merchant. In 1907, Charles E. reappeared, and the business became C. A. Stanton’s Sons Shoe Store, which it remained through 1957. Along the way, Robert F. Stanton finally bought the building in 1918 and, in 1922, it underwent a major remodel, including a new cream-colored “steel” ceiling, tan walls, and new rock maple floor. The original front of the store was demolished and replaced with what is seen today, with recessed entry, dark green marble lower facings, and Luxfer Prism Glass above the signboard. The front entrance stairway to the former second floor residential area was also removed at this time. 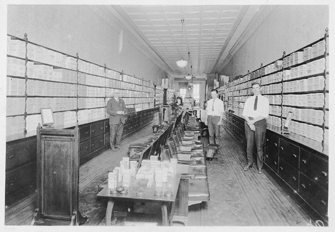 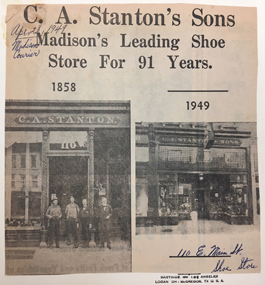 During the 1930s, the Boy Scouts of America used the basement as a rifle range. In 1944, ownership of the building passed from Robert F. Stanton to Charles S. Stanton, grandson of C. A. Stanton. Although the shoe store closed in 1957, the building remained under Stanton family ownership until 1976. All told, the family had owned the building for 58 years, the Stanton shoe store had lasted 78 years, and the building on Lot 77 had housed a boot and shoe business for 99 years.

In 1958, the vacant building saw its most notorious incarnation as the Frank Hirsh Jewelry Store in Vincente Minnelli’s film, “Some Came Running,” starring Frank Sinatra, Dean Martin, and Shirley MacLaine, whose dressing room was located toward the back of the first floor, in the space now occupied by the bookstore’s grand piano. 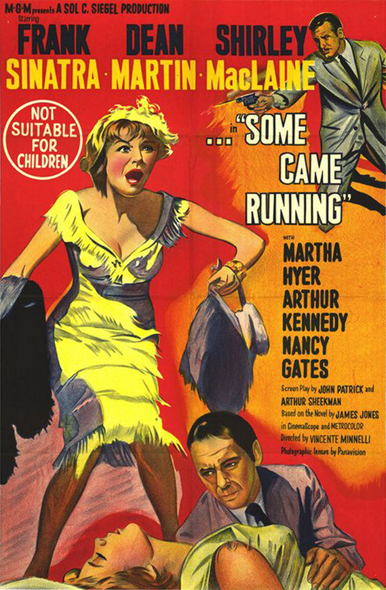 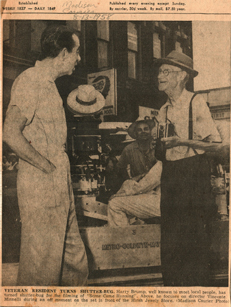 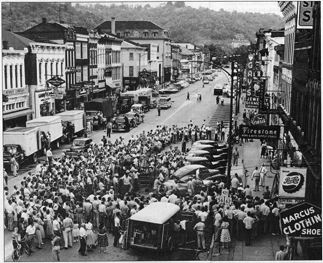 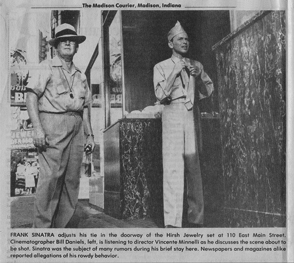 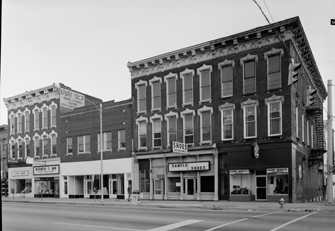 The Building served as a Sears Roebuck & Co. mail order house from 1959 through 1962, during which time a 50-foot cinder block extension was added to the rear of the first floor. In 1964, the building became the home of Kiddie Town and remained a children’s clothing store for 23 years, becoming Kids Wearhouse in 1985 and then Little People’s Boutique from 1985 through 1987. 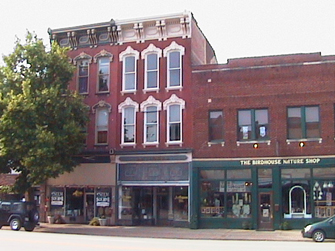 The next 18 years saw a succession of antique stores: Evan Sommerfeld Antiques from 1988 to 1992, The Antique Bazaar from 1993 to 1999, and Antiques, Etc. from 2000 to 2006. During this time there were significant alterations to the rear of the first floor, the addition of updated bathrooms on the second and third floors, and the installation of the large staircase that now leads to the second floor from the front area of the first floor of the bookstore.

In 2006, the building was purchased by Nathan Montoya and Annette Vestuto, and in 2008 they opened Village Lights Bookstore. There is poetic symmetry in this, as, although there was never a bookstore on old Lot 77, there were, in the late Nineteenth Century, no fewer than three bookstores within several yards of its location. The new owners took steps to ensure preservation of the structure and to restore as many historic elements as possible. In 2009, Indiana Lieutenant Governor Rebecca S. Skillman presented Village Lights Bookstore with the Indiana Main Street award for Best Historic Rehabilitation Project. 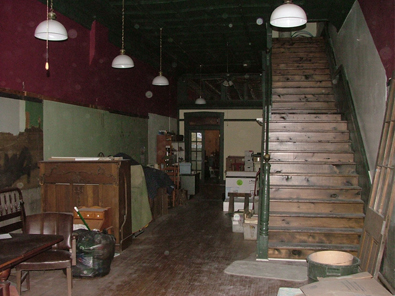 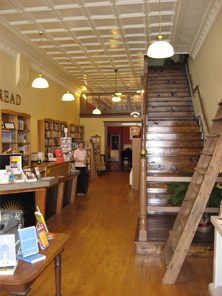 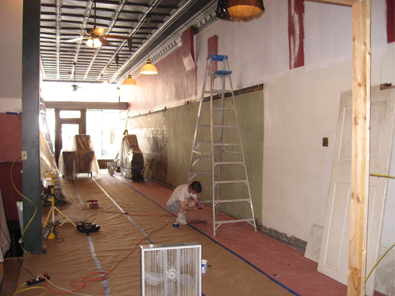 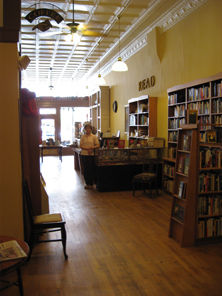 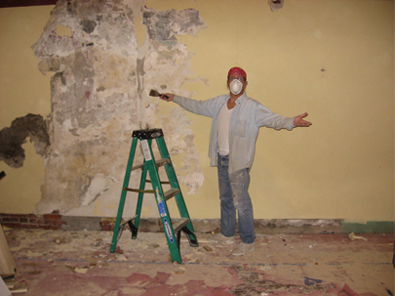 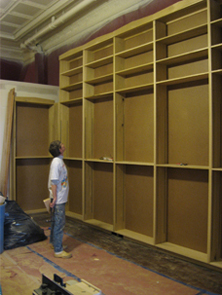 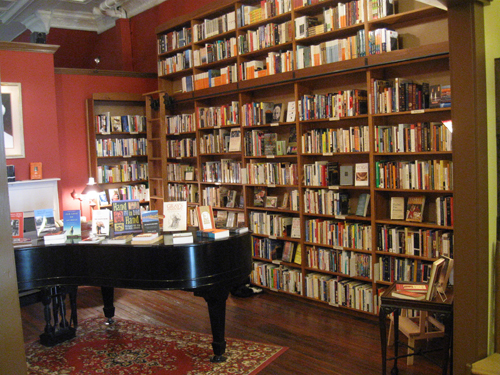 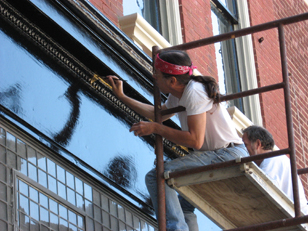 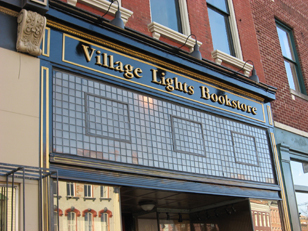 Full use is now made of the entire building. The basement is used for personal storage, the bookstore occupies the entire first floor and half of the second floor, the cinderblock extension added by Sears Roebuck serves as the bookstore’s warehouse, and the third floor has been fully appointed as a private guest suite. Nathan and Anne built their home into the large former manufacturing space in the rear half of the second floor. They live there with their cats and, having spent much of their lives in some very large cities, take daily delight in their commute to work. 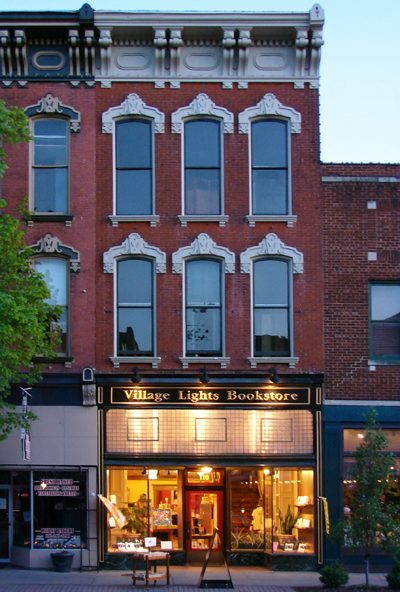