An Evening of World Music 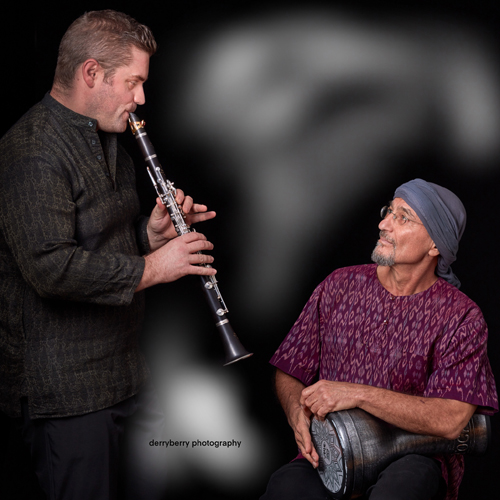 On Friday, November 15th, at 7:30 PM, Village Lights will present our ninth Salon Concert. Drum ‘n’ Wind is a duo featuring master musicians Jamal Mohamed on percussion and Jonathan Jones on woodwinds. They explore melodies, textures, and improvisations, using an array of acoustic and electronic instruments, drawing inspiration and musical ideas from traditional music from a wide variety of cultures. They have performed together around the world using rhythms and melodic content from Africa, Asia, and the Middle East, as well as contemporary American music. 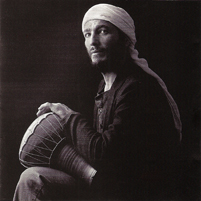 Jamal Mohamed has been a featured artist in many international music events having performed with Sting, Stewart Copland, Mark O’Connor, Giovanni Hidalgo, and many other well-known artists. He has presented percussion workshops at venues worldwide, including Berklee College of Music in Boston; the National Institute of Fine Arts in Mexico City; the Tokyo School of Music in Tokyo, Japan; the American University in Cairo, Egypt; the Center for World Music in Bali, Indonesia; and the University of Hong Kong, to name a few. A native of Lebanon, Jamal grew up in the Chicago area, where he was exposed to rich blues and jazz traditions as well as the Middle Eastern music he heard at home. Known for his virtuosity on the doumbek (Middle Eastern goblet drum), Jamal has incorporated many innovative jazz and Latin styles with this ancient instrument. He is acknowledged as a master craftsman and builds many of his own instruments. In 2010 Toca Percussion introduced the “Jamal Doumbek,” a signature drum he designed with Toca. In 2018 Toca introduced 5 new “Jamal” signature drums including riq (Arabic tambourine) and mazhars (Arabic frame drums). Jamal was one of the founding members of the percussion group D’Drum, the 2010 winner of Drum! magazine’s award for best percussion group. He is currently on the faculty of the Meadows School of the Arts at Southern Methodist University, where he teaches percussion, and directs the Meadows World Music Ensemble. He will be in the state to present a workshop at the Percussive Arts Society International Convention in Indianapolis. 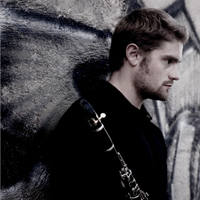 Jonathan Jones is internationally renowned as a virtuoso clarinetist and multi-instrumentalist. In his traditional endeavors he holds the position of Principal Clarinetist with the Dallas Chamber Symphony and the Las Colinas Symphony while performing regularly with the Fort Worth Symphony and many other orchestras. He has been described in The Dallas Morning News as “a passionate and virtuosic musician responsible for all-out playing.” A frequent soloist, he has performed the European premiere of Ricky Ian Gordon's Orpheus and Euridice and recitals at l'Accademia Santoro and the Matese Friend Festival in Italy. Jonathan has won numerous awards including the Grand Prize of the Fort Collins Symphony International Artist Competition in Colorado, where he was the first clarinetist in 52 years to be so honored. He was awarded the Gold Medal by the President of Italy at the 2007 Concorso Musicale Internazionale in Castellaneta, Italy. Jonathan specializes as an artist able to play and improvise in any genre around the world on a plethora of instruments including the Electronic Wind Instrument (EWI), slide didgeridoo and the Chinese hulusi. He performs in several groups including Drum ‘n’ Wind, alongside master percussionist Jamal Mohamed, and, with Marek Eneti, the electronic duo Apollo’s Flight. Jonathan is a Yamaha and Toca Performing Artist.

It’s a performance you don’t want to miss. 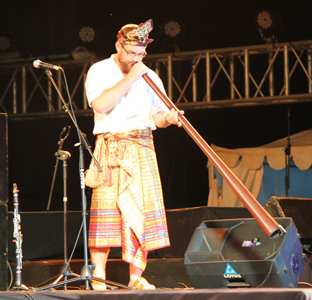