Come join Kaylie Jones in conversation with J. Patrick Redmond, author of Some Go Hungry. Kaylie and Patrick will be speaking about Kaylie Jones Books (an imprint of Akashic Books), writing, contemporary publishing, and Kaylie's collective of writers "taking a stand." Both Kaylie and Patrick will be answering audience questions and signing copies of their respective novels. This event is free and open to the public. 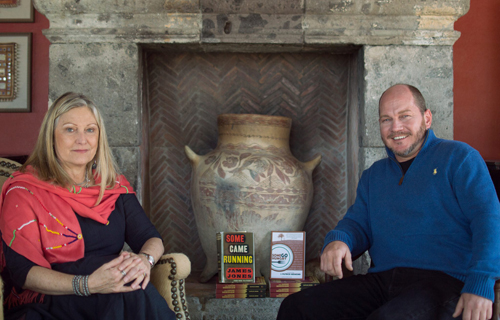 J. Patrick Redmond was born and raised in southern Indiana and recently returned to his home state after sixteen years of living in South Florida and teaching for the Miami-Dade County Public School System. He holds a BA in English from Florida International University in Miami and an MFA in creative writing and literature from Stony Brook University in Southampton, New York. He is a contributing blogger for the Huffington Post, and his writing has appeared in the NOH8 Campaign blog, the Southampton Review, and in the Barnes & Noble Review's Grin & Tonic. He is also the 2012 recipient of the Deborah Hecht Memorial Prize in Fiction. Some Go Hungry is his first novel, and when asked about it, Patrick says, "It's about God, guns, gays, and green beans."

Kaylie Jones has published seven books, including a memoir, Lies My Mother Never Told Me, and her most recent novel, The Anger Meridian. Her novel A Soldier’s Daughter Never Cries was adapted as a Merchant Ivory film in 1998. Jones has been teaching for more than twenty-five years, and is a faculty member in the Stony Brook Southampton MFA in Creative Writing & Literature program and in Wilkes University’s MFA in Creative Writing program. She is the author of Speak Now and the editor of Long Island Noir. Her newest endeavor is her publishing imprint with Akashic Books, Kaylie Jones Books. She is the daughter of James Jones, author of From Here to Eternity and Some Came Running, the book on which Vincente Minnelli's film was based.

Some Go Hungry is a fictional account drawn from the author's own experiences working in his family's provincial Indiana restaurant--and wrestling with his sexual orientation--in a town that was rocked by the scandalous murder of his gay high school classmate in the 1980s.

Now a young man who has embraced his sexuality, Grey Daniels returns from Miami Beach, Florida, to Fort Sackville, Indiana, to run Daniels' Family Buffet for his ailing father. Understanding that knowledge of his sexuality may reap disastrous results on his family's half-century-old restaurant legacy--a popular Sunday dinner spot for the after-church crowd--Grey struggles to live his authentic, openly gay life. He is put to the test when his former high school lover--and fellow classmate of the murdered student--returns to town as the youth pastor and choir director of the local fundamentalist Christian church.

Some Go Hungry is the story of a man forced to choose between the happiness of others and his own joy, all the while realizing that compromising oneself--sacrificing your soul for the sake of others--is not living, but death.

10% of proceeds from in-store sales of Some Go Hungry will be donated to PFLAG of Hanover/Madison, Indiana.