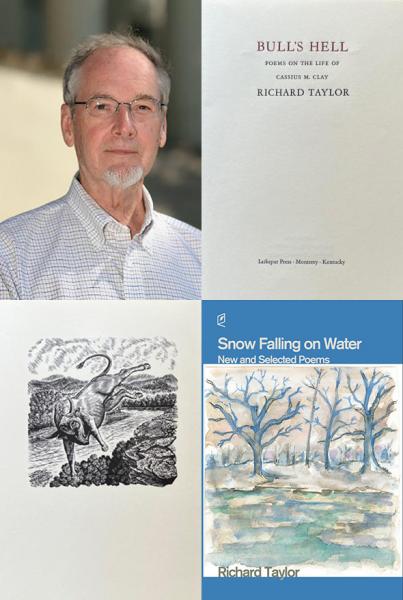 This new collection from Accents Publishing, a small independent press based in Lexington, Kentucky, presents poems spanning nearly five decades of the poet’s career, from 1975 to the present.

Bull's Hell: Poems on the Life of Cassius M. Clay

Richard Taylor’s latest book is offered in letterpress, cloth or paper bound, by Larkspur Press. Hidden in the woods outside of Monterey, Kentucky, Larkspur Press creates books that are works of art, each one a delight for hand, eye, and spirit. In letterpress printing, the words are in the paper not on it. All Larkspur work is handset in metal type, often enhanced with woodcuts or wood engravings, printed mainly on a hand-fed press on fine machine made paper, and bound by hand. Larkspur Press books are limited editions by their very nature. In letterpress printing there is one print run of a given title, after which the handset metal type is disassembled. Once the existing stock from that printing is depleted, the title is “out of print” and no longer available from the Press. Already highly collectible for their beauty and the works they contain, they then become even more highly valued due to their scarcity.