Author Asa Dunnington will be at Village Lights signing copies of his book. 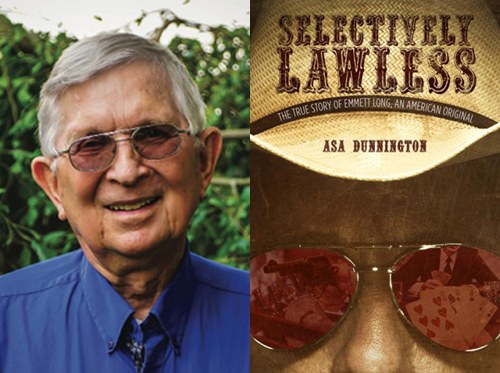 In the early twentieth century, money, power, and reputation were king. With outlaws like Pretty Boy Floyd and Baby Face Nelson roaming the streets, it was a lawless time, with lawless individuals taking their fates and fortunes into their own hands. Emmett Long was one of them. Bank robber, moonshiner, gambler, and on occasion even a killer, he made his own rules. But he varied from the typical story. Instead of dying at the young age of thirty-something in a blaze of guns and fury, he lived to a ripe age, reformed his ways, found Christianity, married a good woman, raised a family, and became a successful rancher. Not the expected turn of events for such a lawless beginning. In a new twist to the classic Great Depression outlaw narrative, Asa Dunnington shares the life story of his uncle in Selectively Lawless: The True Story of Emmett Long, an American Original.

Asa Dunnington was born June 7, 1939, in Logan, Iowa. He has had a wide variety of fascinating jobs, from writing for a newspaper to serving in the Air Force to working on a Presidential campaign. His first wife was Emmett Long's niece, and when Dunnington met Emmett on a family vacation, he knew he had found someone special. Asa agreed to record Emmett's life. Asa is now married to his second wife, Cheryl. He has three children and nine grandchildren. He has also written his autobiography, What a Life!.