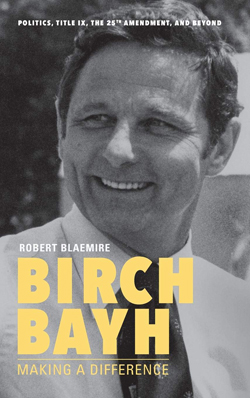 Robert Blaemire will be at Village Lights signing copies of his highly acclaimed new book, Birch Bayh: Making a Difference, from Indiana University Press. There will be a talk with Q&A at 2:00 in our second floor Reading Room. A remarkable history of one of the most legendary US senators of our time, Birch Bayh: Making a Difference reveals a life and career dedicated to the important issues facing Indiana and the nation, including civil rights and equal rights for women. Born in Terre Haute, Indiana, right before the Great Depression, Birch Bayh served more than 25 years in the Indiana General Assembly (1954-1962) and the United States Senate (1963-1981). His influence was seen in landmark legislation over his tenure, including Title IX, the 25th Amendment, the 26th Amendment, Civil Rights of the Institutionalized, Juvenile Justice & Delinquency Prevention Act, and the Bayh-Dole Act. Bayh was also the author, chief Senate sponsor, and floor leader of the Equal Rights Amendment and successfully led the opposition to two Nixon nominees to the Supreme Court. Robert Blaemire profiles not only the prolific career of this remarkable senator but also an era when compromise and bipartisanship were common in Congress. 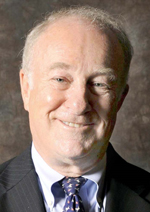 Robert Blaemire began working for Senator Birch Bayh while a freshman in college and remained on his staff for the next 13 years. After Bayh’s election defeat in 1980, Blaemire formed a political action committee, the Committee for American Principles, to combat the influence of the New Right in American politics. In 1982, he began a long career providing political computer services for Democratic candidates and progressive organizations. An early participant in the rise of big data, he owned and managed Blaemire Communications for 17 years. Born in Indiana, he lives in Bethesda, Maryland and has two sons and a daughter-in-law.

"Robert Blaemire’s celebration of Birch Bayh’s career evokes a different and better time in American politics, when leaders really did think about making a difference. . . . Read this memoir and remember a time when people like Bayh, and the decent, compassionate politics of the heartland, were truly the American way."

"In Birch Bayh: Making a Difference, it is clear Bayh’s influence and his contributions will continue to affect all Americans for generations to come in many ways."

"Robert Blaemire’s Birch Bayh is a marvelous biography of Bayh, a dynamo in Indiana politics and the national scene throughout the 20th century."