A.J. Flick - Toxic Rage: A Tale of Murder in Tucson

True crime author A.J. Flick will be at Village Lights signing copies of her book, Toxic Rage: A Tale of Murder in Tucson, from Wildblue Press. There will be a reading with Q&A at 2:00 in our second floor Reading Room. To order the book now, drop in or call Village Lights, 812-265-1800. The book will also be available at the event. 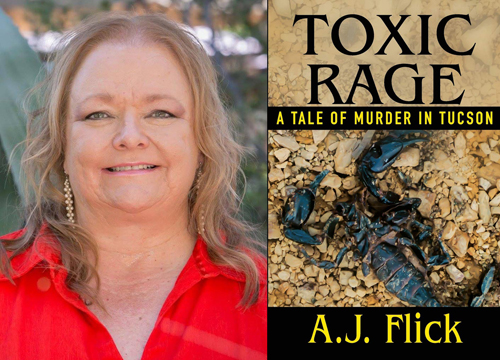 Toxic Rage: A Tale of Murder in Tucson

Brian Stidham fell in love with Tucson, Arizona, the minute he came to town. A young and talented eye surgeon, he accepted a job with an established eye surgeon to take over his pediatric patients. "It's a beautiful place," Stidham told a friend. "I can live right there by the mountains and go hiking. It's a great deal for me there. The partner I'll be working with is ultracool. He's giving me the keys to the kingdom." Three years later, his life ended in an empty, darkened parking lot. Who would murder such a nice man in such a violent manner? His fiancée, Lourdes Lopez, a former prosecutor, feared she knew. But would her suspicions be enough to catch the killer?

A.J. Flick is a writer, editor and repurposed journalist. She graduated from the University of Arizona with a degree in journalism. She covered the case detailed in Toxic Rage, her first book, while reporting for the now-defunct Tucson Citizen newspaper. Since leaving daily journalism, she has been working as an author, freelance journalist, book editor, copywriter, screenwriter and campaign communications director. She grew up in Maryland, the Philippines, Indiana, and Arizona. She lives in Tucson, Arizona, and loves visiting Madison, her Indiana hometown.

Toxic Rage: A Tale Of Murder In Tucson (Paperback)