Come together again in these divisive times for more tongue-in-cheek fun at Village Lights as New York Times Best-Selling Author, Andrew Shaffer, shares his latest book – another mystery thriller reuniting two old chums for a political mashup full of suspense, intrigue, and laugh-out-loud bromance. When Andrew Shaffer’s novel Hope Never Dies burst onto the literary scene in July 2018, it became an instant best seller, appearing in the New York Times, Washington Post, Entertainment Weekly, USA Today, Fox News, and more. The high-action mystery that put Joe Biden and Barack Obama in the role of amateur detectives grabbed the attention of everyone looking for an escape from the current political state of affairs. Now, Shaffer is back with even more mystery, action, and intrigue in Hope Rides Again. 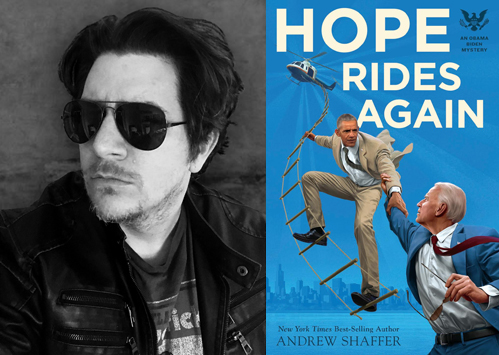 Andrew Shaffer will discuss Hope Rides Again. A Q&A and signing will follow the discussion. The event is free and open to the public; no registration required. To join the signing line, you simply have to have purchased the book from none other than Village Lights Bookstore. To pre-order it now, drop in or call Village Lights, 812-265-1800. The book will also be available at the event.

Sherlock and Watson. Riggs and Murtaugh. Obama and Biden?

It’s St. Patrick’s weekend in 2019, and Joe Biden is tired. Between a whirlwind book tour and constant speculation about his potential presidential run, he’s anxious to get out of the spotlight and back home to Jill. With one last stop in Chicago, he’s looking forward to carving out some quality time to visit with his BFF: ex-POTUS Barack Obama. In turn, Obama wants to support Joe by connecting him with up-and-coming community leaders who could be influential to voters if Biden decides to run for president. For Joe, finding time in Barack’s schedule—and a place on Obama’s home turf of Chicago—proves difficult. But when Barack’s Blackberry is stolen and all signs point to an unlikely culprit who ends up shot, the two friends must once again team up to solve the crime . . . before Joe catches his flight home.

Hope Rides Again takes Joe and Barack on an action-packed ride across Chicago, where they encounter a range of enigmatic characters, from burlesque dancers to Russian masseurs to Oprah herself (well, almost). A cathartic escape from the political status quo, Hope Rides Again will have readers cheering for their elected officials at a time when it may feel difficult to do so.

Andrew Shaffer is the New York Times best-selling author of the Obama Biden Mystery series (Quirk), the satirical thriller The Day of the Donald: Trump Trumps America (Crooked Lane Books), and the Goodreads Choice semifinalist Fifty Shames of Earl Grey: A Parody (Da Capo Press/Hachette Books), among other humorous fiction and nonfiction books for HarperCollins and Penguin Random House. He is known for his humor and boundary-pushing writing, which he does with aplomb in Hope Rides Again: An Obama Biden Mystery. He lives in Kentucky with his wife, the author Tiffany Reisz.

An Official Summer Read of Publishers Weekly and the Interrobang

“[It’s] a roughly 300-page work of political fanfiction, an escapist fantasy that will likely appeal to liberals pining for the previous administration, longing for the Obama-Biden team to emerge from political retirement as action heroes. But it’s also at times a surprisingly earnest story about estranged friends who are reunited under strange circumstances.” — Alexandra Alter, New York Times

“While readers are sure to get a kick out of the codenames and inside jokes used playfully throughout, Hope Never Dies is an intriguing saga that doesn’t sacrifice momentum for winks and nods.” — Entertainment Weekly