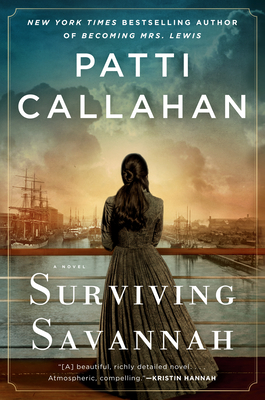 "An atmospheric, compelling story of survival, tragedy, the enduring power of myth and memory, and the moments that change one's life."
--Kristin Hannah, #1 New York Times bestselling author of The Four Winds

"[An] enthralling and emotional tale...A story about strength and fate."--Woman's World

“An epic novel that explores the metal of human spirit in crisis. It is an expertly told, fascinating story that runs fathoms deep on multiple levels.”—New York Journal of Books

It was called "The Titanic of the South." The luxury steamship sank in 1838 with Savannah's elite on board; through time, their fates were forgotten--until the wreck was found, and now their story is finally being told in this breathtaking novel from the New York Times bestselling author of Becoming Mrs. Lewis.

When Savannah history professor Everly Winthrop is asked to guest-curate a new museum collection focusing on artifacts recovered from the steamship Pulaski, she's shocked. The ship sank after a boiler explosion in 1838, and the wreckage was just discovered, 180 years later. Everly can't resist the opportunity to try to solve some of the mysteries and myths surrounding the devastating night of its sinking.

Everly's research leads her to the astounding history of a family of eleven who boarded the Pulaski together, and the extraordinary stories of two women from this family: a known survivor, Augusta Longstreet, and her niece, Lilly Forsyth, who was never found, along with her child. These aristocratic women were part of Savannah's society, but when the ship exploded, each was faced with difficult and heartbreaking decisions. This is a moving and powerful exploration of what women will do to endure in the face of tragedy, the role fate plays, and the myriad ways we survive the surviving.

Patti Callahan is a New York Times bestselling author and is the recipient of the Harper Lee Award for Distinguished Writer of the Year. She is a frequent speaker at luncheons, book clubs, and women's groups.

"Fans of Christina Baker Kline and Kate Quinn will love this beautiful, richly detailed novel about a lost bit of American maritime history. In a seamless blending of fact and fiction, Patti Callahan has created an atmospheric, compelling story of survival, tragedy, the enduring power of myth and memory, and the moments that change one's life."--Kristin Hannah, #1 New York Times bestselling author of The Great Alone

"Hidden history rises from the watery depths in all its glittering glory but also in its intimate, human detail. Meticulously researched, beautifully written, underpinned by timeless themes of personal trauma and its aftereffects, Surviving Savannah is a journey readers and book clubs will treasure.”--Lisa Wingate, #1 New York Times bestselling author of The Book of Lost Friends

"Both Augusta and Lilly are women of their times, dependent on their family, especially the males, but their struggles at sea after the boiler explosion, and amid the fear and heavy loss, reveal courage and a resilience to survive that elevates them and brings on newfound strength."--Historical Novels Review

"The stuff of which Oscar worthy movies are made, Surviving Savannah is a masterfully crafted and simply riveting read."--Midwest Book Review

"Fiercely hopeful...Callahan’s expertly-drawn characters are forced to discover how to live past tragedy, and what matters most in the aftermath. This is exactly the kind of story we need right now."--Paula McLain, New York Times bestselling author of The Paris Wife

"[A] lush, meticulously researched deep-dive into the little-known story of a historic shipwreck....Surviving Savannah is a lyrical homage to this southern city and makes a real contribution to the historical record."--Stephanie Dray, New York Times bestselling author of America’s First Daughter

“Through the interwoven tales of three courageous women, Surviving Savannah ​grips the reader in a spellbinding novel full of mystery, tragedy, sacrifice, and resilience....Superb.”--Kristina McMorris, New York Times bestselling author of Sold on a Monday

"Patti Callahan masterfully weaves a little known historical tragedy, an enigmatic mystery, and a searing family saga into a mesmerizing tale that will captivate readers until the last page and beyond."--Pam Jenoff, New York Times bestselling author of The Lost Girls of Paris

"[S]pellbinding....Beautifully written with a masterfully crafted plot, Surviving Savannah leaves the reader breathless and marveling at the manner in which the past and present interweave in ways we almost cannot imagine."--Marie Benedict, New York Times bestselling author of The Only Woman in the Room

“[A] rich tale of friendship, heritage, forgiveness, redemption, and the thin, too-fragile line between life and death. How will we survive the surviving? one of her characters wonders, and it is a question that Callahan mines beautifully. If you’re fascinated by the Titanic, meet your new favorite novel."--Kristin Harmel, New York Times bestselling author of The Book of Lost Names

"The astonishing story of the 'Titanic of the South' is brought to vivid life....This tale of survival, love, and loss, as well as Callahan’s epic portrayals of a trio of strong, passionate women, gripped me from the very first page. Simply masterful."--Fiona Davis, New York Times bestselling author of The Lions of Fifth Avenue

“Riveting...a heartfelt exploration of the pain of survival amid incalculable loss, and a mesmerizing character study of three women...[A] memorable and profoundly moving novel that readers are destined to cherish.” --Jennifer Robson, international bestselling author of The Gown

“[A] sweeping, captivating tale of a contemporary woman lost in a fog of grief who finds solace, and finally, redemption, as she uncovers the long-buried secrets of a nearly forgotten shipwreck—and the courageous women who survived to bear witness to history.”--Mary Kay Andrews, New York Times bestselling author of Hello, Summer