Spin: A Novel Based on a (Mostly) True Story (Hardcover) 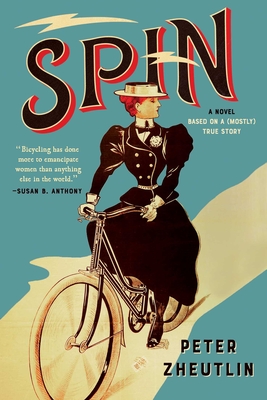 Ride away on a 'round-the-world adventure of a lifetime—with only a change of clothes and a pearl-handled revolver—in this trascendent novel inspired by the life of Annie Londonderry.

“Bicycling has done more to emancipate women than anything else in the world.”—Susan B. Anthony

Who was Annie Londonderry? She captured the popular imagination with her daring ‘round the world trip on two wheels. It was, declared The New York World in October of 1895, “the most extraordinary journey ever undertaken by a woman.”

But beyond the headlines, Londonderry was really Annie Cohen Kopchovsky, a young, Jewish mother of three small children, who climbed onto a 42-pound Columbia bicycle and pedaled away into history.

Reportedly set in motion by a wager between two wealthy Boston merchants, the bet required Annie not only to circle the earth by bicycle in 15 months, but to earn $5,000 en route, as well. This was no mere test of a woman’s physical endurance and mental fortitude; it was a test of a woman’s ability to fend for herself in the world.

Often attired in a man’s riding suit, Annie turned every Victorian notion of female propriety on its head. Not only did she abandon, temporarily, her role of wife and mother (scandalous in the 1890s), she earned her way selling photographs of herself, appearing as an attraction in stores, and by turning herself into a mobile billboard.

Zheutlin, a descendent of Annie, brilliantly probes the inner life and seeming boundless courage of this outlandish, brash, and charismatic woman. In a time when women could not vote and few worked outside the home, Annie was a master of public relations, a consummate self-promoter, and a skillful creator of her own myth. Yet, for more than a century her remarkable story was lost to history. In SPIN, this remarkable heroine and her marvelous, stranger-than-fiction story is vividly brought to life for a new generation.

Peter Zheutlin is the author of the New York Times bestseller Rescue Road: One Man, Thirty Thousand Dogs and a Million Miles on the Lost Hope Highway; Rescued: What Second-Chance Dogs Teach Us About Living with Purpose, Loving with Abandon, and Finding Joy in the Little Things; and The Dog Went Over the Mountain: Travels With Albie—An American Journey (also available from Pegasus Books), a Lowell Thomas/Societ of American Travel Writers Award winner. Peter lives in Massachusetts with his wife, author Judy Gelman.

“An icon at the dawn of women’s cycling, Annie Londonderry was part athlete, part adventurer, and part scoundrel. In Spin, Peter Zheutlin takes inspiration from her real-life story to present a rollicking account of her bicycle trip around the world and explore the personal costs of forging ahead as an ambitious New Woman in the 1890s.”
— Sue Macy, author of Wheels of Change: How Women Rode the Bicycle to Freedom

“From the travails of pedaling a 42-pound bicycle over shoddy roads to the adjustments Annie made to her riding costume and her enterprising approach toward financing her journey, Spin gives an account of Annie’s travels fizzing with admiration for her moxie. Zheutlin, one of Annie's descendants, adeptly handles her propensity to make up stories to drum up publicity, creating an adventure that grapples with a remarkable woman's secrets and shortcomings.”
— Booklist

"SPIN is a thrilling story that will keep the reader breathless until the end. This mostly true story begins with a bored housewife and mother in the 1890’s who takes a wager to circle the world on a bicycle. The reader gets to ride along with Annie as she meets the most famous people of the day and finds love and adventure in every long mile. This tale will stay with you long after Annie’s last ride."
— The Southern Bookseller Review

"The sheer chutzpah of a woman in the 1890s setting off on her own to travel the world with only her bicycle and a small trunk made Spin a wonderful book."
— The Reporter