Some Hell: A Novel (Paperback) 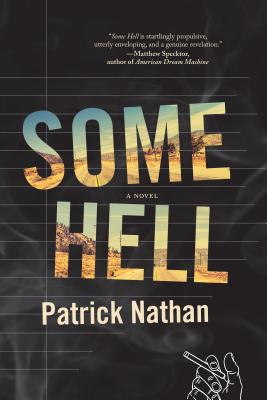 “The teen years are difficult for most young people, but 14-year-old Colin is having a particularly devastating experience. In the aftermath of his father's suicide and an epic betrayal by his best friend, Colin tries to come to terms with his budding sexuality and his role in the new dynamics of his troubled family. His father's diaries and a road trip with his mother open new horizons for Colin as he attempts to find his place in an uncertain future. Author Patrick Nathan takes a brutally honest look at coming of age in the wake of tragedy. Prepare for an unflinching look at the life of the modern family in this stunning debut by a talented and fresh voice in fiction.”
— Pamela Klinger-Horn, Excelsior Bay Books, Excelsior, MN

Colin’s family is dissolving in the aftermath of his father’s suicide. While his mother, Diane, retreats into therapy and cynicism, Colin clings to every shred of normal life. Awash with guilt, he casts about for someone to confide in: first his estranged grandfather, then a predatory science teacher. Shunned by his siblings and rejected by his homophobic best friend, Colin immerses himself in the notebooks his father left behind. Full of strange facts, lists, and historical anecdotes that neither Colin nor Diane can understand, the notebooks infect their worldview until they can no longer tell what’s real and what’s imagined. A novel of aching intensity, Some Hell shows how unspeakable tragedy shapes a life, and how imagination saves us from ourselves.

Patrick Nathan’s short fiction and essays have appeared in Gulf Coast, Boulevard, the Los Angeles Review of Books, and elsewhere. This is his first novel. He lives in Minneapolis.

“The result is a very different literary thriller, one in which the mystery is not who killed the victim, but how those who kill might live with what they’ve done. . . . Some Hell becomes a canny and terrifying moral fable about our new and old American ways of both being together and missing each other.”—The New York Times Book Review

“A heartbreaker of a book, Patrick Nathan’s debut novel captures the hell of adolescence under particularly dire circumstances.”—Esquire

“Orphic and original. . . . Each sentence of this dark Bildungsroman—obsessed with the intertwined logics of desire, disaster, and death—kept me enthralled.”—Nathan Goldman, Literary Hub

“The full-heartedness in Colin’s capacity for hope and love even amidst his crumbling surroundings is what makes all of the weight of this book bearable. That sliver of hope is what allows us to see this story through to the end, with the idea that maybe even those in the worst of circumstances one can find something like peace.” —PopMatters

“An impressive and poignant debut.”—Largehearted Boy

“A gripping account of the intricately woven mind of a teenager. . . . Nathan has crafted an all-consuming novel in which topics like suicide, homosexuality, parenting, friendship, and psychology make up a precarious tableau in which readers can leave their own subjectivity behind and experience the world from Colin’s singular viewpoint. . . . A magnetic first novel combining wit, sex, and apocalyptic reverie.”—Kirkus Reviews, starred review

“[Patrick Nathan] does a masterful job of creating believable, multidimensional characters about whom the reader cares desperately.. . . Nathan’s first novel is beautifully done and promises to linger in the reader’s memory.”—Booklist, starred review

“Readers will find moments of beauty in the rawness of grief’s confusions and yearning.”—Publishers Weekly