Outback and Out West: The Settler-Colonial Environmental Imaginary (Hardcover) 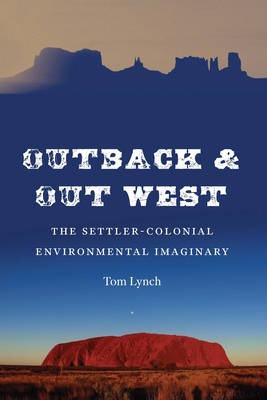 Outback and Out West examines the ecological consequences of a settler-colonial imaginary by comparing expressions of settler colonialism in the literature of the American West and Australian Outback. Tom Lynch traces exogenous domination in both regions, which resulted in many similar means of settlement, including pastoralism, homestead acts, afforestation efforts, and bioregional efforts at “belonging.” Lynch pairs the two nations’ texts to show how an analysis at the intersection of ecocriticism and settler colonialism requires a new canon that is responsive to the social, cultural, and ecological difficulties created by settlement in the West and Outback.

Outback and Out West draws out the regional Anthropocene dimensions of settler colonialism, considering such pressing environmental problems as habitat loss, groundwater depletion, and mass extinctions. Lynch studies the implications of our settlement heritage on history, art, and the environment through the cross-national comparison of spaces. He asserts that bringing an ecocritical awareness to settler-colonial theory is essential for reconciliation with dispossessed Indigenous populations as well as reparations for ecological damages as we work to decolonize engagement with and literature about these places.

Tom Lynch is a professor emeritus of English at the University of Nebraska–Lincoln. He is the author of Xerophilia: Ecocritical Explorations in Southwestern Literature and the editor of Thinking Continental: Writing the Planet One Place at a Time (Nebraska, 2017) and El Lobo: Readings on the Mexican Gray Wolf.

“A formidable book. Outback and Out West is guided by a crucial insight: not only do settler societies develop in places that are elsewhere, on Indigenous lands away from colonizing countries of origin, but they also entertain enduring relationships with places that are simultaneously a part of and yet stubbornly distinct from themselves. It is a complex relation, and the ‘Outback’ and the ‘West’ emerge as constituent parts of the settler-colonial national imaginaries of Australia and the United States: they are these settler nations’ indispensable and meaningful other ‘others.’”—Lorenzo Veracini, author of The World Turned Inside Out: Settler Colonialism as a Political Idea

“Tom Lynch is an expert on both American and Australian literature and history, and he deftly weaves together the two cultural strands in a way that illuminates both. No other study uses literature as the primary window into the two cultures quite like this book does, employing ecocriticism and settler-colonial theory as the primary scholarly approaches. Lynch is deeply familiar with the subject matter and offers an engaging, personal angle.”—Scott Slovic, coeditor of the series Routledge Studies in World Literatures and the Environment series