Being Mortal: Medicine and What Matters in the End (CD-Audio) 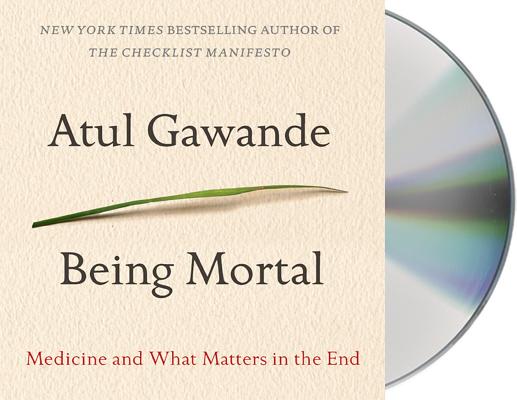 By Atul Gawande, Robert Petkoff (Read by)
$34.99
Email or call for price

“Widely respected and honored physician Gawande addresses aging and end-of-life issues in his newest book. He notes that we treat sickness, aging, and mortality as medical concerns, but that the medical professions are poorly equipped to help with the issues of what makes the quality life significant. Gawande proposes that well-being should be the focus at the end of life and carefully illustrates how to approach this difficult subject. A gracefully written book of great importance.”
— Ann Carlson, Waterfront Books, Georgetown, SC

In Being Mortal, bestselling author Atul Gawande tackles the hardest challenge of his profession: how medicine can not only improve life but also the process of its ending

Medicine has triumphed in modern times, transforming birth, injury, and infectious disease from harrowing to manageable. But in the inevitable condition of aging and death, the goals of medicine seem too frequently to run counter to the interest of the human spirit. Nursing homes, preoccupied with safety, pin patients into railed beds and wheelchairs. Hospitals isolate the dying, checking for vital signs long after the goals of cure have become moot. Doctors, committed to extending life, continue to carry out devastating procedures that in the end extend suffering.

Gawande, a practicing surgeon, addresses his profession's ultimate limitation, arguing that quality of life is the desired goal for patients and families. Gawande offers examples of freer, more socially fulfilling models for assisting the infirm and dependent elderly, and he explores the varieties of hospice care to demonstrate that a person's last weeks or months may be rich and dignified.

Full of eye-opening research and riveting storytelling, Being Mortal shows how the ultimate goal is not a good death but a good life—all the way to the very end.

Atul Gawande is the author of four bestselling books: Complications, a finalist for the National Book Award; Better; The Checklist Manifesto, and Being Mortal. He is also a surgeon at Brigham and Women's Hospital in Boston, a staff writer for The New Yorker, and a professor at Harvard Medical School and the Harvard School of Public Health. He has won the Lewis Thomas Prize for Writing about Science, a MacArthur Fellowship, and two National Magazine Awards. In his work in public health, he is Founder and Chair of Ariadne Labs, a joint center for health systems innovation, and Lifebox, a nonprofit organization making surgery safer globally. He is also chair of Haven, where he was CEO from 2018-2020. He and his wife have three children and live in Newton, Massachusetts.

Robert Petkoff has won multiple AudioFile Earphones awards for his acclaimed narrations. He was named Best Voice of Fiction & Classics for his reading of The Evolution of Bruno Littlemore by Benjamin Hale. His other narration credits include Oath of Office by Michael Palmer, Gangster Squad by Paul Lieberman, and books by David Foster Wallace.Petkoff has appeared on Broadway, Off-Broadway, and in theaters across America and Europe.  He has worked in television and film. His theater credits include Lord Evelyn Oakleigh in the Broadway production of Anything Goes, Perchik as part of the Tony-nomianted cast of Fiddler on the Roof, and Hubert Humphrey in the Tony award-winning play All the Way. He has also had numerous roles in television on shows such as Law and Order and Married with Children.

“Being Mortal, Atul Gawande's masterful exploration of aging, death, and the medical profession's mishandling of both, is his best and most personal book yet.” —Boston Globe

“American medicine, Being Mortal reminds us, has prepared itself for life but not for death. This is Atul Gawande's most powerful--and moving--book.” —Malcolm Gladwell

“Beautifully crafted . . . Being Mortal is a clear-eyed, informative exploration of what growing old means in the 21st century . . . a book I cannot recommend highly enough. This should be mandatory reading for every American. . . . it provides a useful roadmap of what we can and should be doing to make the last years of life meaningful.” —Time.com

“Masterful . . . Essential . . . For more than a decade, Atul Gawande has explored the fault lines of medicine . . . combining his years of experience as a surgeon with his gift for fluid, seemingly effortless storytelling . . . In Being Mortal, he turns his attention to his most important subject yet.” —Chicago Tribune

“Beautifully written . . . In his newest and best book, Gawande . . . has provided us with a moving and clear-eyed look at aging and death in our society, and at the harms we do in turning it into a medical problem, rather than a human one.” —The New York Review of Books

“Atul Gawande's wise and courageous book raises the questions that none of us wants to think about . . . Remarkable.” —John Carey, The Sunday Times (UK)

“A deeply affecting, urgently important book--one not just about dying and the limits of medicine but about living to the last with autonomy, dignity, and joy.” —Katherine Boo

“Dr. Gawande's book is not of the kind that some doctors write, reminding us how grim the fact of death can be. Rather, he shows how patients in the terminal phase of their illness can maintain important qualities of life.” —Wall Street Journal (Best Books of 2014)

“Being Mortal left me tearful, angry, and unable to stop talking about it for a week. . . . A surgeon himself, Gawande is eloquent about the inadequacy of medical school in preparing doctors to confront the subject of death with their patients. . . . it is rare to read a book that sparks with so much hard thinking.” —Nature

“We have come to medicalize aging, frailty, and death, treating them as if they were just one more clinical problem to overcome. However it is not only medicine that is needed in one's declining years but life--a life with meaning, a life as rich and full as possible under the circumstances. Being Mortal is not only wise and deeply moving, it is an essential and insightful book for our times, as one would expect from Atul Gawande, one of our finest physician writers.” —Oliver Sacks

“Gawande's book is so impressive that one can believe that it may well [change the medical profession] . . . May it be widely read and inwardly digested.” —Diana Athill, Financial Times (UK)

“A great read that leaves you better equipped to face the future, and without making you feel like you just took your medicine.” —Mother Jones (Best Books of 2014)

“Gawande displays the precision of his surgical craft and the compassion of a humanist . . . in a narrative that often attains the force and beauty of a novel . . . Only a precious few books have the power to open our eyes while they move us to tears. Atul Gawande has produced such a work. One hopes it is the spark that ignites some revolutionary changes in a field of medicine that ultimately touches each of us.” —Shelf Awareness (Best Books of 2014)

“A needed call to action, a cautionary tale of what can go wrong, and often does, when a society fails to engage in a sustained discussion about aging and dying.” —San Francisco Chronicle