A Magic of Dawn: A Novel of the Nessantico Cycle (Mass Market) 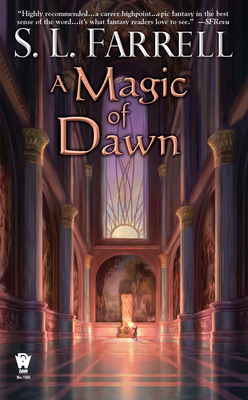 This is book number 3 in the Nessantico Cycle series.

Kraljica Allesandra sits on the Sun Throne of a much-diminished Holdings empire, while her son Jan rules the rival Coalition of Firenzcia. The schism between them threatens to tear apart the realm when they need solidarity the most. Facing powerful threats, from the rising influence of the Numetodo sect to the fundamentalist preacher Nico Morel-as well as the army of Tehuantin from across the sea- Allesandra and Jan must each find a pathway to survival for themselves and their people.

S. L. Farrell boasts (but generally resists sending out) a resume that includes the obligatory long list of occupations, including a stint as half of a juggling act where a few scars and a grudging appreciation for gravity were acquired. Other interests include music, fine art, history, and the fascinating details of cultures both present and past. S. L. is the author of The Cloudmages trilogy: Holder of Lightning, Mage of Clouds, and Heir of Stone; and The Nessantico Cycle: A Magic of Twilight, A Magic of Nightfall,and A Magic of Dawn. S. L. Farrell currently lives in Ohio and teaches Creative Writing at a local university. He can be found at farrellworlds.com.