A Magic of Twilight: Book One of the Nessantico Cycle (Mass Market) 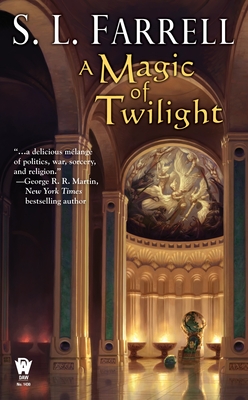 This is book number 1 in the Nessantico Cycle series.

The breathtaking first novel in a brilliant new fantasy series

A masterwork of fantasy, The Nessantico Cycle is the epic tale of an empire at its height, yet poised on the brink of what could be a devastating descent into ruin. Told from the viewpoints of numerous characters, it is a sweeping saga of murder and magic (portrayed both as a powerful religion and a forbidden art), of deception and betrayal, of Machiavellian politics, star-crossed lovers, and a realm facing war on every front.

S. L. Farrell boasts (but generally resists sending out) a resume that includes the obligatory long list of occupations, including a stint as half of a juggling act where a few scars and a grudging appreciation for gravity were acquired. Other interests include music, fine art, history, and the fascinating details of cultures both present and past. S. L. is the author of The Cloudmages trilogy: Holder of Lightning, Mage of Clouds, and Heir of Stone; and The Nessantico Cycle: A Magic of Twilight, A Magic of Nightfall, and A Magic of Dawn. S. L. Farrell currently lives in Ohio and teaches Creative Writing at a local university. He can be found at farrellworlds.com.