The Counter Revolution of 1836: Texas slavery & Jim Crow and the roots of American Fascism (Paperback) 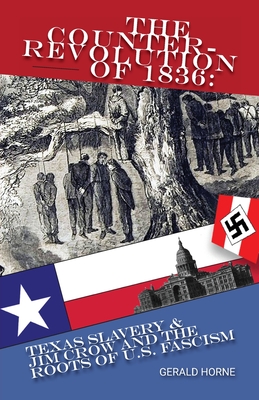 When Mexico moved to abolish slavery, Texas seceded in 1836-in a replay of 1776-- in order to perpetuate enslavement of Africans forevermore. Until 1845 Texas was an independent nation and moved to challenge the U.S. for leadership in the odious commerce of the African Slave Trade: Texas also competed vigorously with the U.S. in the dirty business of denuding Mexico by snatching California in the race to the Pacific and domination of the vaunted China market.

But Texas could not withstand pressure from abolitionist Mexico and revolutionary Haiti and joined the U.S. as a state-under questionable legal procedures-in 1845.

But Mexico continued to support Indigenes and the enslaved, irking Texas, which then led the secession from the U.S. in 1861 in order to perpetuate enslavement of Africans forevermore-though a number of leaders in Austin wanted to avoid the resultant Civil War by moving southward and snatching Cuba, Nicaragua and points southward.

But weakened by conflict with the U.S., Mexico was then seized by France which then plotted with Texas to continue enslavement of Africans after the defeat of the rebels in 1865-and after "Juneteenth" of the same year.

Black troops helped to foil this deviltry but, alas, during the Reconstruction era-1865-1876-these same soldiers were at the tip of the spear as Indigenes were being pounded in West Texas as Black people were being pounded by the Ku Klux Klan in East Texas.

Texans were also in the vanguard during the scandalous 6 January 2021 insurrection on Capitol Hill and promises to be in the forefront as a unique U.S. fascism seeks to rise.

One lesson from Texas is that Repression was so severe because Resistance was so daunting-a lesson to keep in mind as this century unfolds.