Journal of a Novel: The East of Eden Letters (Paperback) 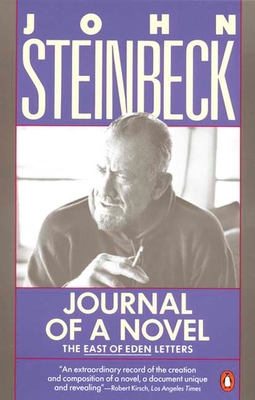 Each working day from January 29 to November 1, 1951, John Steinbeck warmed up to the work of writing East of Eden with a letter to the late Pascal Covici, his friend and editor at The Viking Press. It was his way, he said, of "getting my mental arm in shape to pitch a good game."

Steinbeck's letters were written on the left-hand pages of a notebook in which the facing pages would be filled with the test of East of Eden. They touched on many subjects—story arguments, trial flights of workmanship, concern for his sons.

John Steinbeck, born in Salinas, California, in 1902, grew up in a fertile agricultural valley, about 25 miles from the Pacific Coast. Both the valley and the coast would serve as settings for some of his best fiction. In 1919 he went to Stanford University, where he intermittently enrolled in literature and writing courses until he left in 1925 without taking a degree. During the next five years he supported himself as a laborer and journalist in New York City, all the time working on his first novel, Cup of Gold (1929). After marriage and a move to Pacific Grove, he published two California books, The Pastures of Heaven (1932) and To a God Unknown (1933), and worked on short stories later collected in The Long Valley (1938). Popular success and financial security came only with Tortilla Flat (1935), stories about Monterey’s paisanos. A ceaseless experimenter throughout his career, Steinbeck changed courses regularly. Three powerful novels of the late 1930s focused on the California laboring class: In Dubious Battle (1936), Of Mice and Men (1937), and the book considered by many his finest, The Grapes of Wrath (1939). The Grapes of Wrath won both the National Book Award and the Pulitzer Prize in 1939. Steinbeck received the Nobel Prize in Literature in 1962, and, in 1964, he was presented with the United States Medal of Freedom by President Lyndon B. Johnson. Steinbeck died in New York in 1968. Today, more than 30 years after his death, he remains one of America's greatest writers and cultural figures.

"Full of insights and revelations involving the gladness and terror of writing." —Chicago Sun-Times

"A sort of Travels with Charley across a more personal country." —The Boston Globe