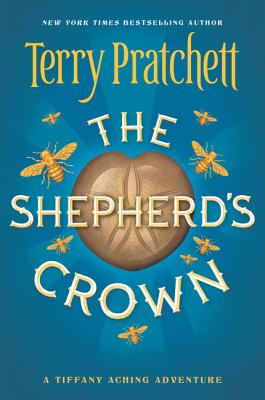 This is book number 5 in the Tiffany Aching series.

A SHIVERING OF WORLDS

Deep in the Chalk, something is stirring. The owls and the foxes can sense it, and Tiffany Aching feels it in her boots. An old enemy is gathering strength.

This is a time of endings and beginnings, old friends and new, a blurring of edges and a shifting of power. Now Tiffany stands between the light and the dark, the good and the bad.

As the fairy horde prepares for invasion, Tiffany must summon all the witches to stand with her. To protect the land. Her land.

“There is something deeply suitable about the significant focus here on legacy and what is left behind. Savor this one; it’s literally the last authorized book coming.” — Bulletin of the Center for Children’s Books (starred review)

“Terry was one of our greatest fantasists, and beyond a doubt the funniest.” — George R. R. Martin

“A Terry Pratchett book is a small miracle.” — Neil Gaiman

“Discworld is one of the very most fabulous creations in all of literature.” — Patrick Ness

“No writer in my lifetime has given me as much pleasure and happiness.” — A. S. Byatt

“Beloved fantasy writer Pratchett died this spring, and his dedicated and immense fan base will want his final novel. His storytelling is pure magic, and fans will grieve anew that this is the last of it. Stock up.” — Booklist